“Shangri La” – the name itself symbolizes beauty and peace. We’ve been there!

Our story begins about ten years ago when a friend named Ralph, who has spent his life wandering the Canadian Rockies, shared with us his “rating system” for places in the mountains. At the time I was hiking with a group of friends in a beautiful area just north of Creston, BC and commented on the scene we were looking at – just rugged mountains, a couple little lakes in an alpine bowl and golden larch trees. Ralph said, “yes it’s nice but it rates only a 3.5”! I said “3.5 out of what?” He said “out of 10”. I was shocked and said “if this is only a 3.5 have you ever been to a 10?!” He said, “no, but I’ve been to a 9.5”. I said, “you’ve got to take me there”.

So, late in September, he guided Howard & I into a place near Invermere, BC that locals call “Shangri La”. It was a tough hike of 12 km, over mostly rock slides, with a 900 metre climb to reach a high pass. We then dropped into this incredibly beautiful, isolated valley. The next 6 hours we hiked as hard as we could to see many of the lakes, all the while gawking at the spectacular mountains, glaciers, waterfalls and golden alpine larches. It was a taste that never left our mouths. We kept talking about going back to Shangri La on a backpacking trip, but it just kept getting put off with other life events.

Finally, this past fall we returned. 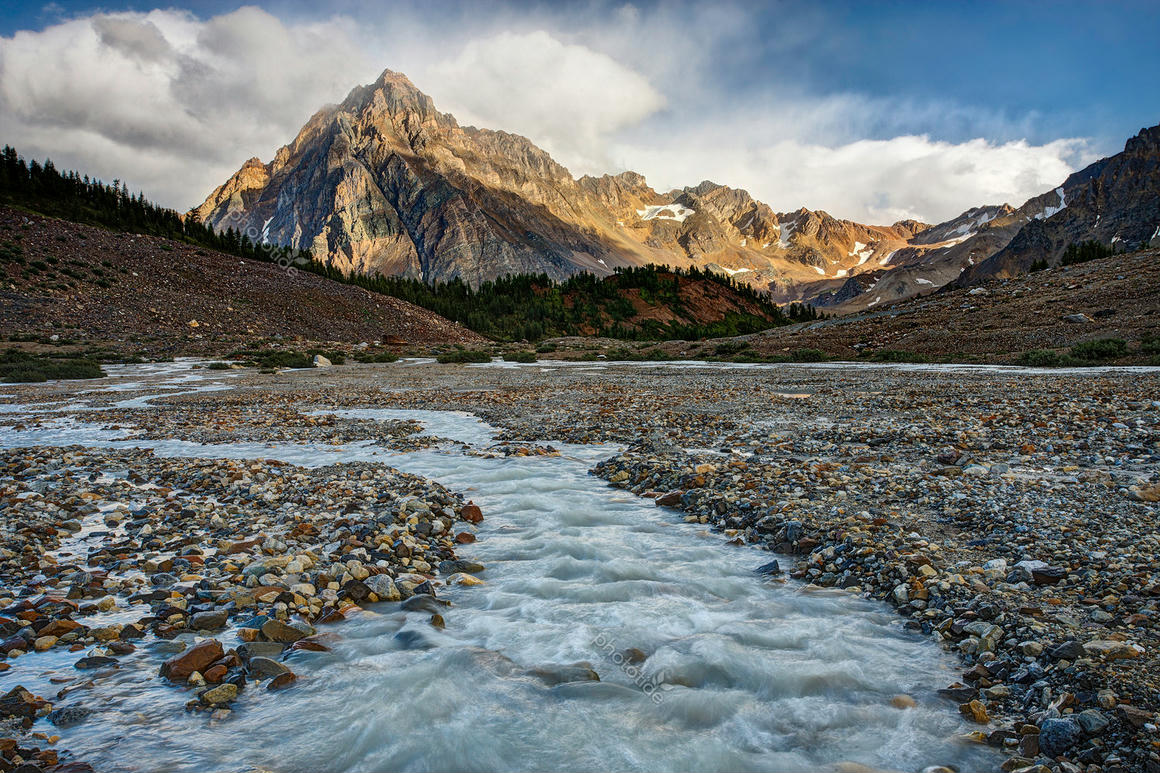 But we had forgotten how tough the hike was! Nine hours carrying camping gear, all-weather clothes, food and camera equipment (cameras, heavy lenses and tripods) – whew! The weather was nasty to boot, a mixture of rain and sleet. But we found the most beautiful campsite beside a jewel of a lake. Tough, but worth it! The weather cleared and the next six days were spent getting intimately familiar with Shangri La.

At an elevation of 2200 metres, the gentle terrain surrounding the lakes was easy hiking on grass through open forest. The valley has many lakes, each with a different colour. The larches were mostly green but just beginning to turn gold. The glaciers still had some of last winter’s snow and a few snow cornices clung to the ridges. Streams run that wonderful glacial blue. And the mountains are built of rich brown sedimentary rock. A near perfect landscape to photograph! 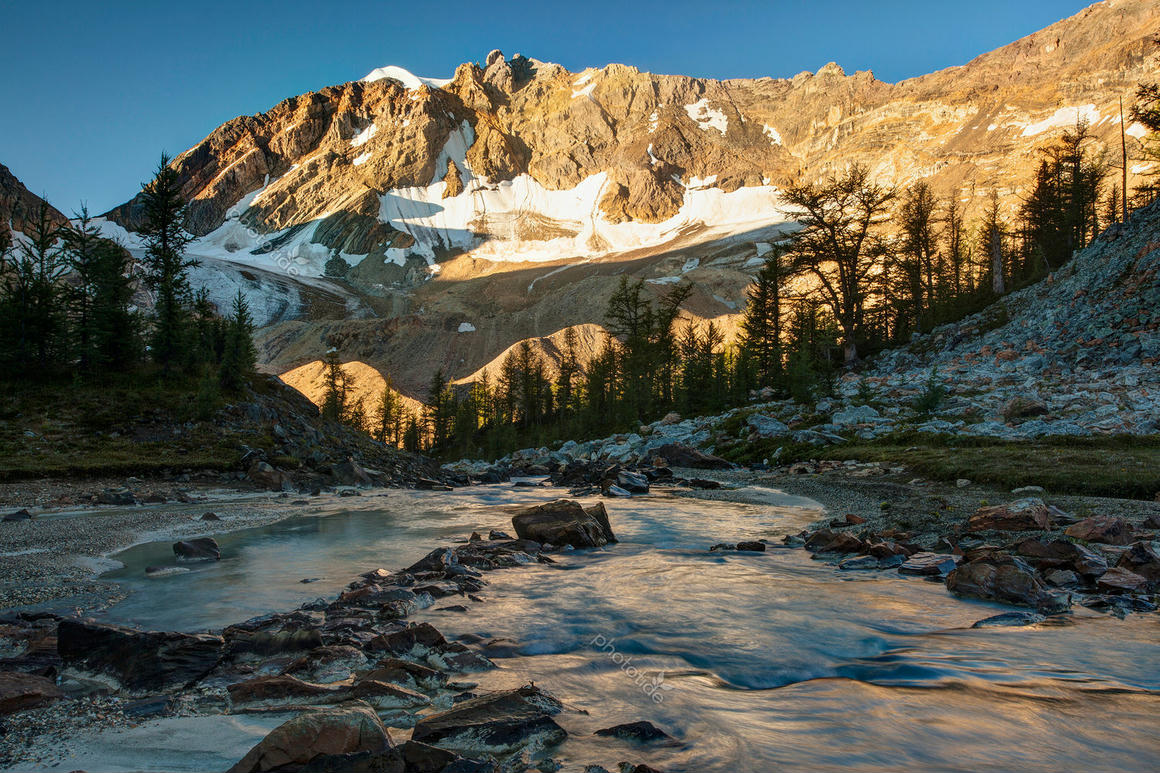 As usual we’d be up at first light, hiking into a location we had scouted. After several hours of shooting we’d return to camp for coffee and breakfast. Then another adventure would begin as we’d hike to find more photographic possibilities. The afternoons were spent resting in the beauty of our campsite or having fun feeding horseflies to hungry trout. Then, after an early supper, we’d catch the evening light.

The beauty is stunning, but what pervaded the valley most was a profound sense of peace. So beautiful, so peaceful! After a few days the peace began to sink in. It’s hard to photograph “peace”, but we tried. We hope these photographs convey that wonderful, elusive emotion and enriches your life too.

Is there a real Shangri La? We know there is!! 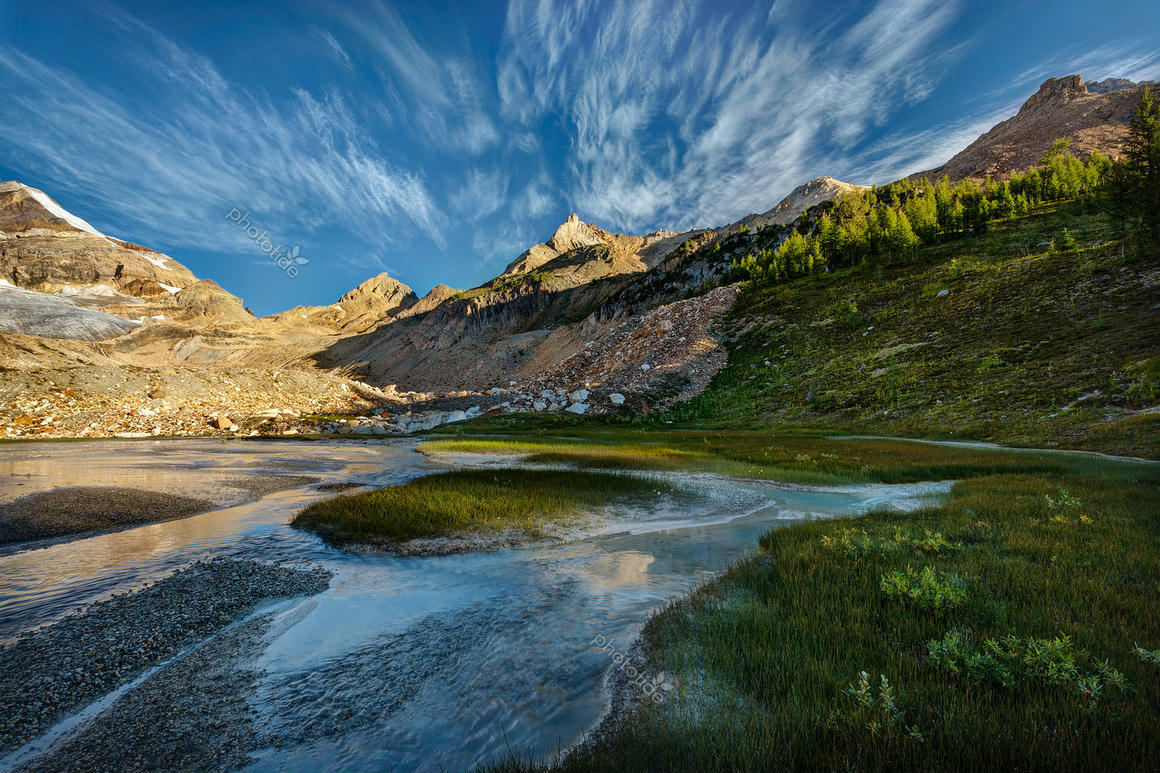